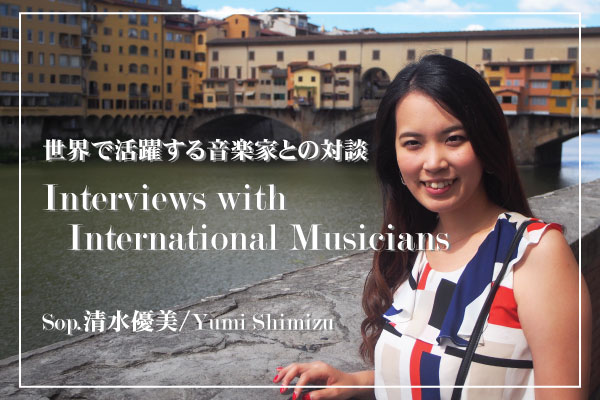 Farhad Mahani is a rising young star in the Italian panorama of classical music conductors. Born in Iran, he has studied in Italy with renowned Maestros and after some valuable experiences with orchestras across the country, he is now creating is own path through an orchestra association he has contributed to establish in Turin. His profile and experiences can inspire many musicians from the younger generation in creating a musical career, despite the difficult times we are living through.

Thanks for having accepted this interview!
Thanks to you!

As a first question, I’d like to ask how you passion for music started.
Well I was actually a late-starter compared to most musicians who being in their infancy, and I started with guitar when I was 17.

Guitar? Well that’s interesting!
Yes, but not classic guitar. It was flamenco guitar. And then I started to meet with very good teachers in Iran who brought me closer to classical music and from that moment I fell in love with composition and conducting. 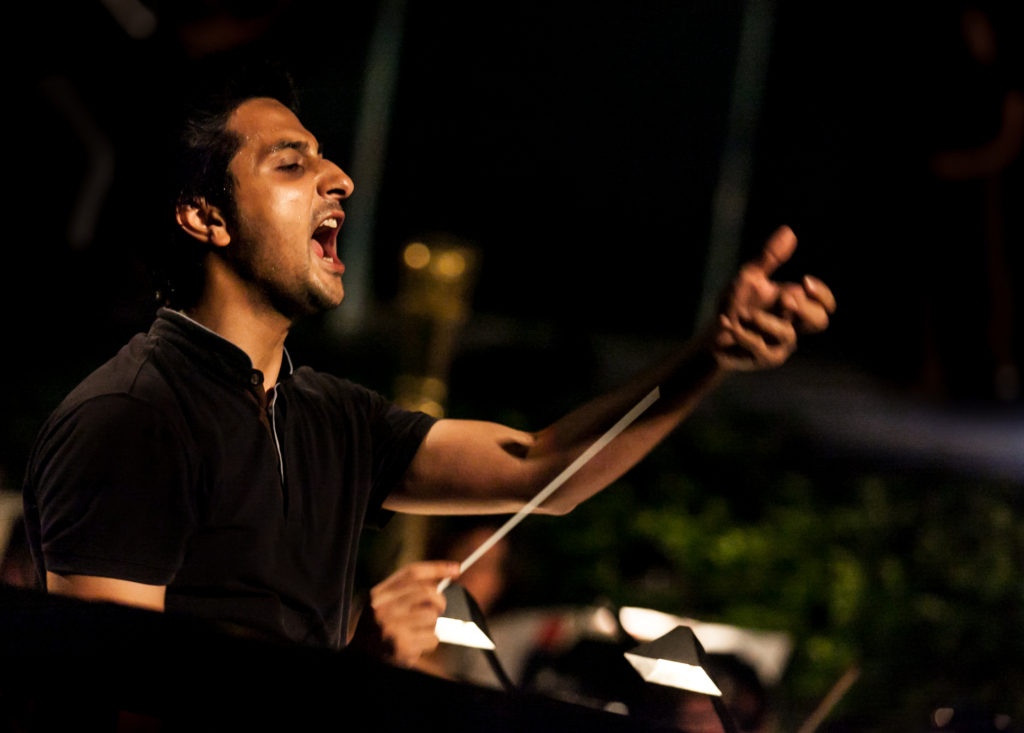 After this encounter with teachers in Iran, did you study there at a music school or conservatory and then you came to Italy?
Actually no, most of my music training was with private teachers because in Iran the level of the music university is not so high, whereas my teachers had studied in Europe. However, for conducting, after a few courses I became more of an autodidact, reviewing video footage of conductors and so on. Carlos Kleiber and Herbert von Karajan were two particular source of inspiration for me and as many musicians from my generation, we started conducting by founding an orchestra.

You founded an orchestra in Iran? That’s great!
Yes, you have to do it in order to learn conducting, theory is not enough. It was a good training for me, with a good number of concerts, then I came to Italy.

And where did you study in Italy?
Well, first I should explain how I came to Italy because my study derived from this. In 2008 a friend of mine sent me a video of conductor Gianandrea Noseda. In that period he was the principal conductor at the Teatro Regio in Torino and therefore I decided to come to Italy to study with him. In 2009 I moved to Italy and I met him in Torino in 2011, he helped me start my study and then I continued at the conservatori in Turin and Florence, where I graduated. In any case I regularly came to Turin in order to study with Maestro Noseda.

So you have two diplomas?
No, I started in Turin but then I left it in order to study conducting in Florence.

So you came to Italy for your study, because of Maestro Noseda. Why did you also stay here for your work?
That’s a difficult question. After 8 years in Italy I had created my network of contacts and it was difficult to start it all over again elsewhere. Besides I was already 30. And by the way I love to live in Italy, despite the many problems the country faces.

Many musicians, some colleagues of mine, studied in Italy but then went elsewhere to start their career. I wanted to know if you also thought about it?
Yes, I did, I wanted to take part to the conducting course at the Mozarteum, but in the end I remained in Italy. I should say a career in conducting depends on your own qualities and on many other factors which have nothing to do with music. Network and contacts is key. At the start of my career I also had some health issues, so I was not able to concentrate on my career 100%. I think you can do in Italy the same things you can do in Germany or other countries.

After 8 years of study, your career has started. How exactly did it start?
It started after I won the National Arts Award in 2013. After that, in 2014, I had my first commitment with the Maggio Musicale Fiorentino and from there many other concerts ensued. Graduating with the “Diploma of Merit” from the Accademia Chigiana, helped me also to meet people in order to expand my career.

I am curious about the music culture in Iran, what can you tell me?
I am not an expert, but there is a great musical tradition and folklore music. Before 1979 many international musicians have visited Iran, there were two important Music festivals and also the Tehran Symphony Orchestra. After the Revolution, all of that was lost, no more renowned artists and the symphonic orchestra was also dismantled.  In recent years more young people have started to have initiatives and found new orchestras but without great specialised schools or universities it’s difficult to start a career.

Many students come to Europe?
Yes, mostly in Germany or Italy, Austria or France.

What about your future, you wish to stay in Italy or return to Iran ?
Hard to tell! I did not go back there in twelve years! 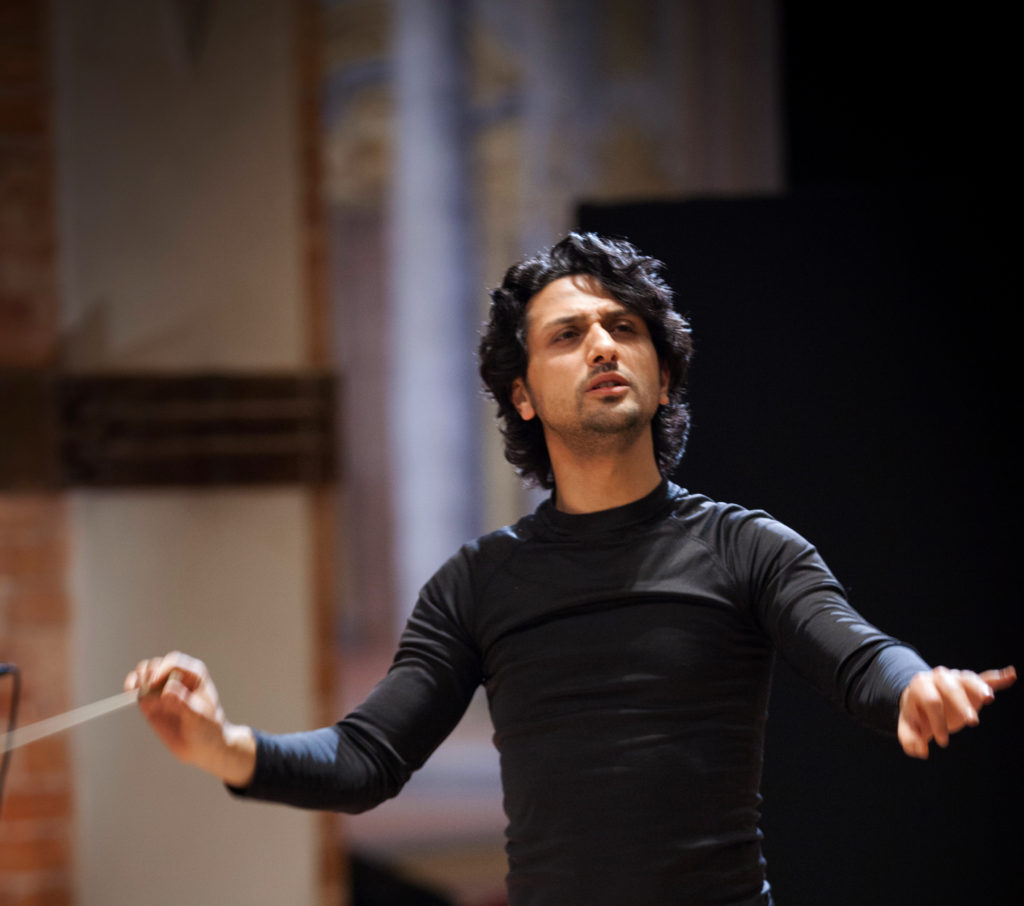 Yes, especially with this pandemic it’s hard to imagine the future. Talking about the Covid19 situation, what did it change for you, especially with live performance in public?
For us it’s key to perform before an audience, so it’s frustrating not being able to do so. We all want to continue to practice our passion, so it’s devastating not being able to do concerts. I hope this general re-set of society will help to re-start, with new business models. From this perspective, a change may also be positive. However, too many artists had to stop performing and work in other sectors in order to survive. Although the situation is unprecedented, there was not much support.

In addition to the first lockdown, theatres in Italy have been shut down since November. The same goes for museums. I was very sad because Italy is such an important country for music.
The government took a decision from an outsider perspective. Theatres have demonstrated to be safe places, with masks, distances… we could have continue to perform. Not foreseeing this situation there was not much support for musicians and artists from the government. 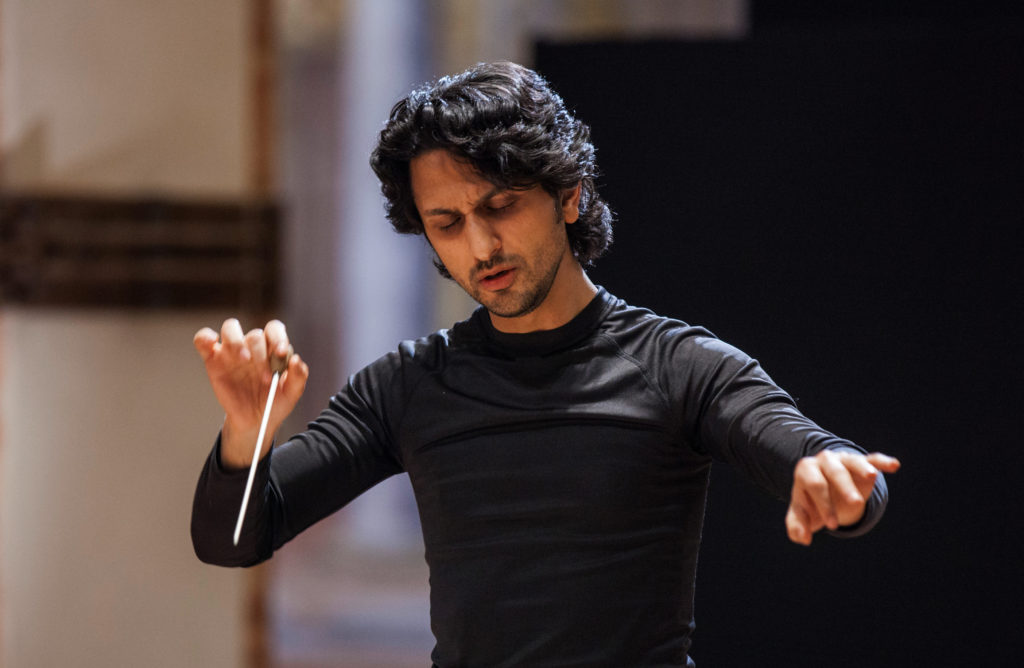 What do you think about streaming concerts? You did one in march, what did you think? What’s the main difference with live concerts and streaming concerts?
When it’s not live, you can repeat many times, which is an advantage. But we miss the energy that comes from the public in attendance, there is no enthusiasm from their side, no applauses… it’s strange.

So you’d prefer to go back to live performances.
Well, until we can’t open theatres, “online concerts” are the only way to continue to perform, but of course to be back in a hall with the public is much better.

There are now many live concerts to be watched on YouTube or Facebook. Somehow it helped the public to come closer to music and art. It was more difficult to bring them to a theatre. What would you say?
I don’t think there is too much difference, the important thing for live-streamed concert is that these must be carefully planned, with a well-thought program. If so, they can also help to bring the public closer to music.

You mean create an atmosphere, a program, together with the public?
Yes, to create a program in order to capture the attention of the public. We grow up in a world where the most famous and important classical music pieces are used all over again. So there is an advantage for us in creating a program with these pieces that are already familiar for the public. It’s kind of a “guide to a listening experience” and people follow you with attention. I can speak from personal experience when I say that some people will never know classical music until you slowly introduce them to it, they can potentially become passionate about it. Some kind of a psychological guidance is required. 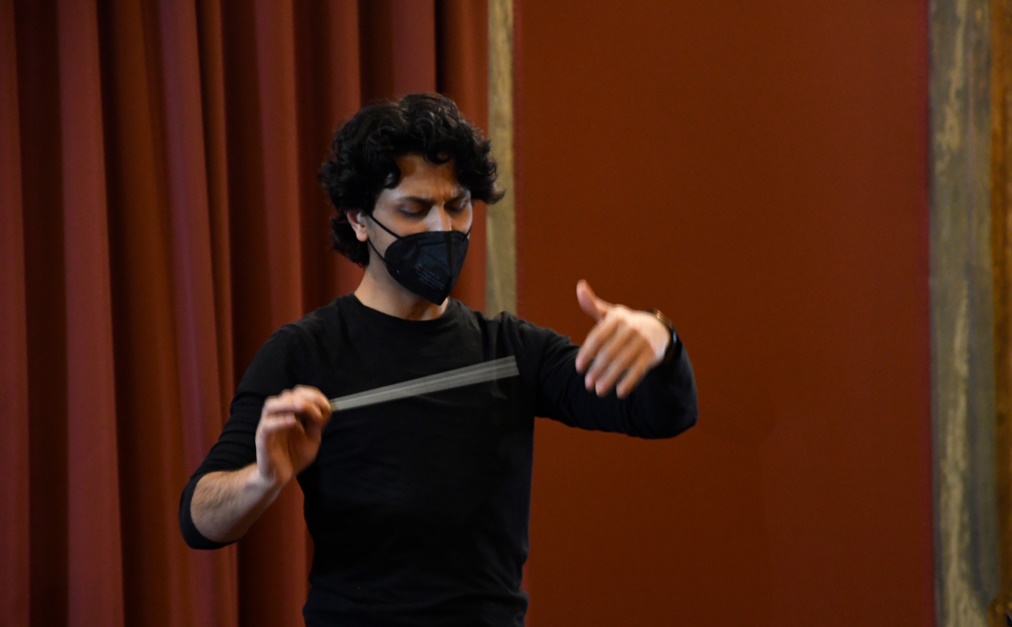 Indeed, it takes time. I’d like to ask you two more questions, one is about your association, Contrametric. Ensemble, Tell us more!
I designed the Idea three or four years ago. By studying with Maestro Noseda, I could take part to many rehearsals, with both Italian and other European orchestras and it was very helpful to study and understand the functionality of these successful orchestras and theatres. I tried more than once to establish this association but it wasn’t always easy. Then I met with exceptional artists that were interested in the idea here in Turin and I could build an innovative musical structure. One of the primary goals of the Contrametric Ensemble is to protect the artist’s life, if an artist’s life is not stable they can’t be concentrated to practice their art.

Additionally, we wanted to something different from the rest of the market. There are so many compositions which are seldom touched by most musicians and orchestras, so by introducing it to the public we can practice our art and also build an identity by introducing a certain repertoire. We will also focus on the gaps that exist in Italy from the structural and planning prospective.

Another goal is to introducing a solution for many musicians that are graduating from Conservatory every year and have no idea how to begin their career. You know It’s so difficult to find a job as a musician, whereas every musician should have a right to start at any level. We want to protect musicians, both newcomers and more experienced ones.

What about Contrametric’s first recording session? I imagine it was quite an emotion for you.
Indeed. I have to say the recording session we did was one of the most difficult productions I did in my professional life. It was a huge organisational challenge, especially during the pandemic. Musicians had last minute issues, problems with the venue, the technicians … but everyone worked very hard and happy to take part in the project. Conducting an orchestra after 7 months was particularly emotional for me. 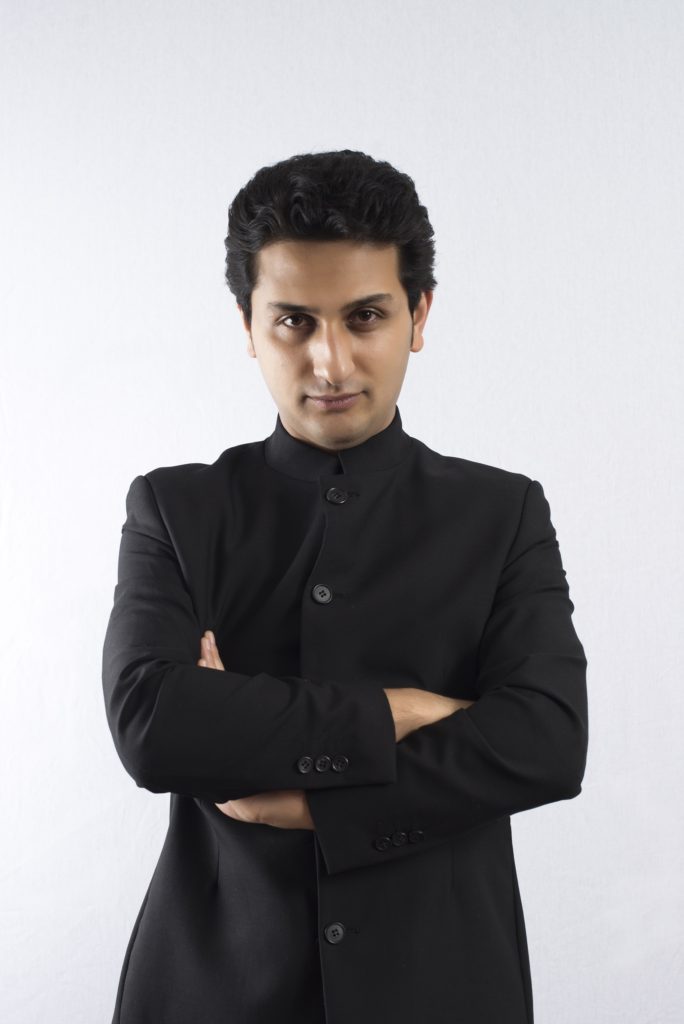 As a final question, from your experience, what message or suggestions can you give to young music students?
Difficult question, I just turned 36…

Yes, but for example for us as foreigners in Europe it can be difficult and you need courage and determination. So for example can you focus your message to students who just started to study music and would like to come to Europe?
If you come from abroad and wish to emigrate, it’s important to have a clear idea about what you want to do and what you want to study. It’s very difficult to go abroad, being alone and not knowing how to manage your life in other country, so determination and vision are key. If you have them, it’s an advantage and a tool to solve problems. It won’t be easy, anyway: there’s always a lack of funds in order to sustain your life expenses. Therefore one can’t ignore sacrifices ahead: it’s important to be aware of this fact.

Thanks, it was very interesting!